While the main draw to Wells in the 1930s was employment, the Wells Townsite Company understood that the availability of sports and recreation served to increase the attractiveness of the mining town to new employees. At its height Wells boasted tennis courts, a golf course, two racetracks, baseball diamonds, a curling rink, a hockey rink, and a ski slope with a world-class jump on Cow Mountain. There were numerous recreational clubs and, like today, the town’s surrounding landscape made Wells a nature-lover’s playground. As a result of long cold winters, many Wellsians participated in a variety of winter sports including hockey, badminton, curling, skiing, snowshoeing, dog sledding, and ice fishing. Popular summer sports included baseball, basketball, tennis, golf, horse racing, hiking, fishing, and hunting. Many locals also gold panned recreationally on the numerous creeks throughout the area.

Wellsians made use of the tremendous snowfall in the sub alpine and skiing became a popular winter activity. Most of the population of Wells owned skis, though they were nothing like the high-tech skis of today; these skis were made of wood and were strapped directly onto the skier’s regular winter boots. For $5.00 plus a dollar or two for a harness, Wellsians enjoyed a winter of skiing. Midnight ski meetings were not uncommon and sometimes the whole community gathered to ski in the moonlight.

The Wells Ski Club hosted an annual cross-country ski meet in February in which many locals took part. The event was so popular that many first-class skiers from other regions travelled to Wells in order to compete. Norwegians Nordahl Kahldal and Henry Sodvet were the driving forces behind building and operating the ski hills in the area. The two men built a jump on Cow Mountain that was nicknamed “Big Jump” owing to the 53 m. (175 ft.) of air one could attain. In addition to “Big Jump,” there was an impressive downhill and slalom hill with a “small” 23 m. (75 ft.) jump. World-class ski jumpers competed here and record Canadian jumps of over 60 metres (197 ft.) were set during the 1930s. The hills and jumps were so good that the 1936 Western Canada Ski and Snowshoe Championships and the 1942 Provincial Ski Championships were held in Wells. 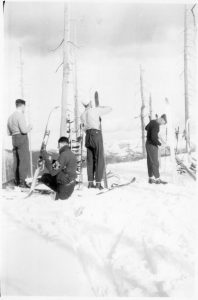 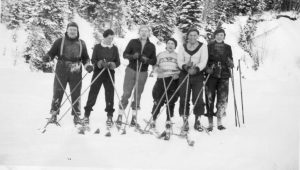 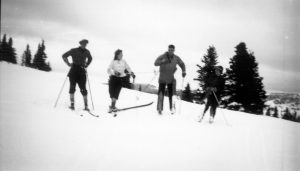 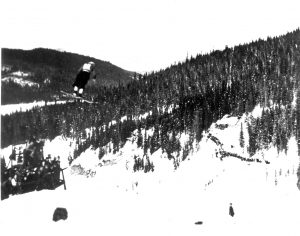 Ice hockey was another popular winter sport in Wells. Two local teams were sponsored by both mines and they competed against each other as well as against teams from nearby Wingdam, Quesnel, Williams Lake, and Prince George. Long travel distances, winter conditions, and expensive costs made it difficult for the players to travel but they managed to maintain a fairly regular schedule. Two Cariboo hockey championship cups, including a challenge cup, kept the rivalry keen and fun between the various teams and communities.

Curling was a popular winter sport and several teams were made up from the Island Mountain Mine, Cariboo Gold Quartz Mine, and the town site. There were club competitions for which numerous cups and prizes were donated by the mines and merchants, as well as bonspiels with Quesnel and Prince George. The curling season closed in the spring with a large, well-attended banquet and dance at which the prizes were presented. 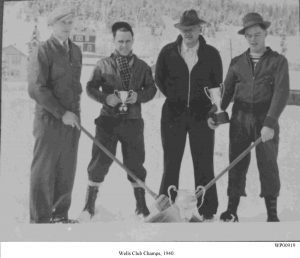 As badminton was an indoor sport, it was enjoyed year-round and the Wells Badminton Club initially played in the Sunset Theatre which was large enough for one court. Unfortunately, theatre management renovated the space and installed a sloping floor with regular theatre seats. While this was great for theatre-going, it was not conducive to badminton and so the club was without a facility until the Community Hall was completed in early 1938. The floor of the new hall was large enough to accommodate three courts which enabled the badminton club to welcome a larger membership. Club competitions provided a source of interest and interclub meets with Williams Lake, Quesnel, and Prince George widened participation.

Of all the sports that attracted spectators during the summer months, baseball drew the largest crowds. The region had a strong, active league composed of teams from Cariboo Gold Quartz, Island Mountain, Barkerville, Wingdam, and Quesnel. Games with Prince George were only played during holiday celebrations. A small fee was charged for locals to attend the games, though sometimes they were washed out owing to the considerable rainfall in the Wells area. A travelling globe-trotting team from the United States even made a point of playing in Wells! 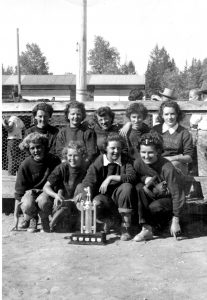 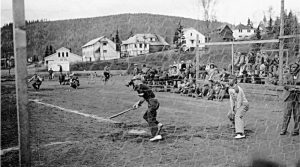 Basketball became popular after the completion of the Community Hall as the new and spacious floor suited the game. Cariboo Gold Quartz, Island Mountain, and Barkerville boasted both Women’s and men’s teams, and people showed a great deal of interest in the sport. Most of the games were played locally but a few were played against Quesnel. Trophies for both the women’s and men’s leagues considerably increased rivalry between the teams.

A local tennis club was active in Wells and the club maintained two clay courts which were originally constructed by the Cariboo Gold Quartz mine.

Around 1941, enterprising businessmen decided to build a golf course in the marshland flats. They staked out nine holes, mowed nine greens, and hired local young boys as caddies. Some of the youngsters in town had the additional job of spotting where the balls landed as they were almost impossible to find in the sawgrass flats. Neither the golf course nor the tennis courts remain today.

Fishing and hunting were popular pastimes and the Wells Rod and Reel Club was active throughout the 1930s, ’40s, and ’50s. Trout and Dolly Varden could be caught within walking distance of town and wild meat could be found in the surrounding forest. Locals hunted and fished not only for recreation but also to supplement food supplies.

The Wells Rifle Club was a sport shooting club. The basement of the Wells Community Hall had an indoor shooting range that the club used for practice as well as for meets.

One of the features of the Labour Day celebration was based on gold field history. During the original gold rush, legend had it that the stagecoach from Quesnel had been robbed while passing through Devil’s Canyon which was a few miles west of Wells. This was re-enacted in fine style.

The big day in Wells was the Dominion Day weekend. Wells boasted a well-developed fair ground on the flats including a half-mile racetrack, baseball diamond, and other areas for log sawing and chopping competitions. The nail driving competition was always well attended and usually won by Ray Forbes who was a carpenter by trade. Mrs. Allstrop’s horse Blackie invariably won the main horse race of the day.