Early gold rush towns sprung up without any structure; shacks were put up without any planning or services, as was the case with nearby Barkerville. Most placer miners only wanted to rush in, make their money, and leave as quickly as possible. They would exhaust the creek beds of gold and depart to other prospects, abandoning their temporary homes. Later, in the early 1900s, mining companies began organizing the development of the settlements. (For more on this, see the sketch “Features of Company Town“).

In the early 1920s, at the future location of Wells, there was only a sawmill and a roadhouse that had been there since the 1890s. It was the Cariboo Gold Quartz Mining Company that planned, built and maintained the town of Wells in the 1930s.

In 1933, the Cariboo Gold Quartz Mining Company formed a subsidiary called the Wells Townsite Company Limited, to purchase, develop and sell land for Wells. The directors of the Wells Townsite Company were Dr. Burnett, Mr. Solibakke, and Mr. Wells (“The Three Musketeers”), who owned one share each; the balance of 25,000 shares were held by the Cariboo Gold Quartz Mining Company.

The immediate goal of the Townsite Company was to house the flood of miners and their families pouring into the area. The long-term goal of the Townsite Company was to establish a full company town that would become a permanent community. At that time, it was not unusual for a company to establish a townsite; companies needed to attract a stable labour supply to isolated areas and transportation limitations did not make temporary labour a practical solution. The Wells Townsite Company was more than willing to provide the funds for the development of the town, since they expected long term profits from their gold mining.

The Townsite Company sought to provide water and electrical services, a structured town with streets and sidewalks, telephones, and to encourage the relocation of whole families to Wells. Dr. Burnett spoke to shareholders about their preference for married men as employees due to the fact that they were more stable and had responsibilities to provide for their families. Fred Wells further explained the townsite’s objective:

“A town is essential in a neighbourhood where there are 200 men on payroll including Island Mountain Company and ourselves. At present, there are a great many shacks and cabins being built in the woods and along the roadside. It is much better to provide a proper place for people to live and this is what we plan to do.” (The Province, November 27, 1933)

While some other company towns, such as Pioneer Mine’s Bridge River, sought profits from the townsite as well as the mine operations, Wells encouraged private development to help develop the community. Though it was still a company town, the founders envisioned a full community with families, businesses, recreation and entertainment beyond the mine. 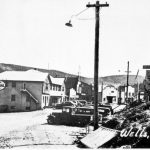 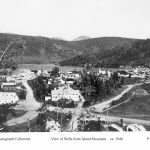 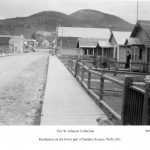 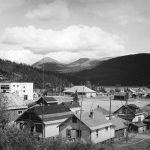 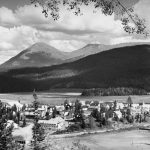